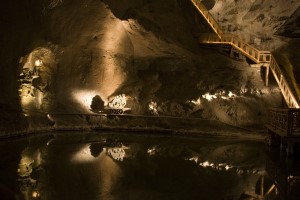 A Step Back in History: Visit the Wieliczka Salt Mine

Four chapels carved out of rock salt, dozens of glistening statues, and a designation as a National Historic Monument make the Wieliczka Salt Mine a “can’t miss” attraction on your visit to Poland.

Built in the 13th Century, the mine continued to produce table salt until 2007, when it operated as one of the world’s oldest mines. Rich in both history and legend, the mine revels in Polish folklore and has found its place in popular music and literature.

The mine’s incredible statues include a likeness of Pope John Paul II made out of salt, a rock salt statue of Princess Kinga, the patron saint of salt miners and a reproduction of Leonardo’s The Last Supper carved delicately into a wall of rock salt. Additionally, miners from the Wieliczka carved the four chapels out of the rock salt walls of the mine.

The Wieliczka Salt Mine found its place in literature after inspiring the Labyrith scenes in Boleslaw Prus’ Pharoh. Further, the mine’s unique chapel has been used as a recording studio and was identified by Polish composer Zbigniew Preisner as having the best acoustics in Europe.

A 30-second elevator ride will allow visitors to descend into the historical bowels of the mine, where concerts and theatre shows are common. Visitors can tour the Chapel of St. Kinga, built in honor of Princess Kinga who was said to have thrown her engagement ring into the mines, only to have it recovered, encased in a chunk of salt, by lucky miners.

Multiple tours are available for the adventurous or casual tourist. Those seeking a challenging adventure will enjoy the “Mysteries of the Wieliczka Mine Tour” while families are welcomed on the “The Mine for Grown Ups and the Little Ones” Tour. The religiously themed “Pilgrims’ Route Tour” offers a sacred experience while the “Miners’ Route” highlights the long and rich history of Wieliczka.